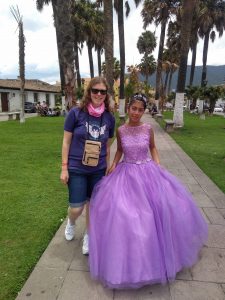 In January of 2021, my dad came up with a proposition.  He suggested I spend 2 weeks in either Costa Rica or Guatemala studying Spanish.  I initially rejected this idea.  Still figuring out how to overcome a certain anxiety disorder, I  was nervous about traveling abroad alone.  What if I missed out on some important event?  How would I feel being alone without anyone to explore with?

My dad brought up the topic a few more times over the next three months.  And in March of 2021 I changed my mind.  Upon reflection, two weeks seemed like a manageable amount of time to spend alone in a foreign country.  I booked a plane ticket to Antigua, Guatemala and reserved my spot at a local Spanish school.

July of 2021 rolled around and I found myself being driven to the airport by my mom.  We said our goodbyes and I boarded a plane to Guatemala.  The suspense of what was to come was both exhilarating and nerve-wracking.

My plane landed in the Ciudad de Guatemala.  During the flight, I was seated next to a native Guatemalan lady who inquired about my plans.  When I told her that I would figure out transportation to my hostel at the airport, she offered to drive me to Antigua.  So, I spent 45 minutes in her car’s backseat next to her two teenage sons gazing out the windows at the dimly lit houses.

I had reserved a bunk bed in a local hostel for the first three nights in Antigua.  I can’t say that I did much other than explore the local town.  My last day at the hostel, I confronted my anxiety of people and introduced myself to two other female travelers.  One was from California and the other from Belgium.  We spoke about our plans within the country and exchanged numbers.  This experience alone reduced some of my fear of talking to people. 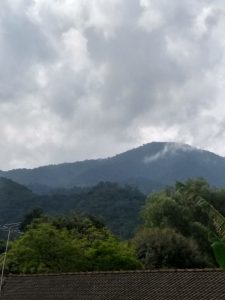 Before my Spanish class commenced the next week, I moved in with a local lady from Antigua.  She was to be my hostess for the next two weeks.  The food that she cooked was amazing, and I learned a thing or two about bringing out adding flavor to food.

My hostess lived by herself in a charming modest-size house with the windows frequently left open during the day.  One of her daughters lived in a smaller house on the same property along with three of her grandchildren.  Sometimes I would sit on a bench underneath a tree and watch the little girls as they played, asking them questions about their games.

My Spanish class commenced on a Monday at a local school, La Union.  Instruction took place with one-to-one classes in a larger room that seated multiple teachers and students.  My instructor was a 27-year-old young woman from a smaller town near Antigua.  The one-to-one instruction made it more bearable for me to ask questions and contribute ideas.  The duration of my class was two weeks.  In that short span of time, I was able to build upon my existing Spanish skills.

After spending two weeks studying Spanish in Guatemala, I walked away with not only a more improved command of the language but also some new understandings of communication in general.  You see, prior to beginning my classes I had some ideas as to what my experience talking to people would be like.

I came to the school already knowing some basic Spanish.  Both my parents were proficient in Spanish and would speak to me in the language, thereby imparting a basic knowledge of Spanish.  So I wasn’t worried about having to ask for basic necessities (bathroom, directions, food, water, pencil, etc.).  I was, however, interested in my ability to hold an interesting conversation with other people in Spanish.

That proved to be a more challenging task than I’d imagined.  When immersed in conversations with native speakers, I frequently found myself needing to pause for several seconds or a couple minutes.  It wasn’t easy trying to remember how various English words and phrases translated into Spanish.

Speaking with my hostess was actually harder than talking to the people at the language school.  My hostess and I relied solely on verbal communication to exchange ideas.  Given my lack of proficiency in the language, this made it difficult to hold a flowing conversation with her.

However, I learned to use other tools to convey my ideas to other people when at the language school.  During each of my lessons, my instructor used a variety of resources to help reinforce the meaning of the various words.  Our primary method of study was filling out a workbook, but we also played games, used stories, and drew pictures.

The last three days of the class we were joined by another instructor-student pair.  The student was from Korea and was at roughly the same level as me in Spanish.  Our group of four played a few word and board games and shared about unique things to our cultures and countries.  We learned collectively that some of the games we played as children are very similar in each of our countries.

One of my biggest takeaways was that there are many more shared methods of communication than we realize.  We don’t need to rely on words and shared languages to convey ideas.  Pictures, songs, stories, objects, and games are also effective and valid ways of communicating with one another.

Many people seem to have a limited or narrow view of communication.  Their idea of communication includes a verbal or written exchange of ideas.  Additionally, this exchange needs to be conducted in a shared language.  Body language is also widely recognized as a universal form of communication, although sometimes it’s misinterpreted. 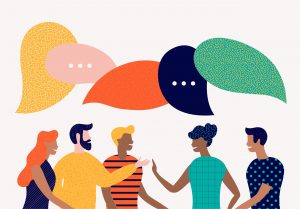 When kids and teenagers fail to express themselves with words, others become frustrated.  They think that the child is being willful or reserved.  I’ve heard several people say they wish toddlers who are barely of speaking age would use their words more.  I myself have been told that it seemed ridiculous that I wouldn’t talk as a teenager since I’ve always had a decent-size vocabulary.

The issue with this is that some kids and teenagers (and even adults) are not able to communicate using words.  And there are a variety of reasons for this.  These reasons include extreme anxiety, speech delays, developmental delays, language disorders, processing disorders, etc.  It’s not a matter of willfulness for kids that don’t speak, but a case of inability. 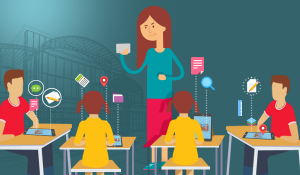 I came away with some different ideas from my time in Antigua.  Games, pictures, drawings and objects are all examples of shared forms of communication.  I’ve also seen different methods used in schools.  Basic sign language is becoming increasingly popular to teach to children of all ages.  I’ve also seen hand gestures and signals being used in classrooms.  Many teachers will encourage kids to write on whiteboards to share answers and ideas.  And I’ve witnessed teachers who use writing or journaling as a way of communication.

When people are unable to communicate their needs and ideas, it leaves them feeling isolated and helpless.  They also begin to rely on those around them to do the talking.  Every child and person deserves to feel as if they have a voice in their community.  giving kids different ways to communicate actually empowers them.

Additionally, when kids are able to rely on other methods of communication, they have an easier time learning to use their words.  Not giving kids a voice reinforces the idea that they are powerless and need the help of other people to be heard.  We do a grave injustice to future generations and leaders of the world when we don’t actively seek multiple ways of giving them a voice so they can use their voice in the future.

Communication Lessons: Lessons from a Spanish Class in Guatemala

The Best Time to Resolve an Argument
Advocating for Students Effectively